The longer you own your computer, the more apps you're going to install over time. But there's probably going to come a time when you don't want or need all of them. What's the best way to get rid of them? 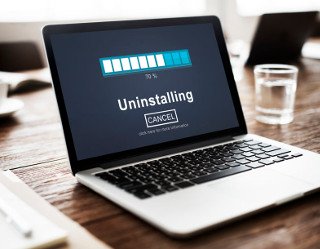 1. It's quick, easy and simple to remove a program

An uninstaller has one job: To remove the programs you don't want. Using a third-party uninstaller means using the best tool for the job. You won't have to figure out what files to remove or what boxes to check — all you need to do is specify the program you don't want and hit "remove." The uninstaller will take care of everything.

Most third-party uninstallers work with surprising quickness. They can wipe a program from your hard drive in just a few minutes, leaving no trace behind. You don’t want to spend a ton of time trying to locate files for removal or trying to figure out where parts of the app live on your computer. A good uninstaller saves you the trouble and does everything for you.

Even if the program comes with a native uninstaller, it's best to use a third-party uninstaller. Why? Because even though it might remove the file, a native installer will likely leave behind fragments. No software developer wants you to uninstall their application! Many will make it as hard as possible to get rid of it. Native uninstallers can leave behind sneaky preference files or breadcrumbs that let parts of the unwanted program linger on your hard drive.

2. No more leftover files lingering around

Leftover files from an uninstalled program can cause all sorts of problems. Not only do they clutter up your hard drive, they might cause conflict with your computer's processes or other programs.

Some of the most common left-behind programs are preference files and registry files. Preference files make it easy to get the program up and running again if you decide to re-install it. But, after the program is gone, they can become corrupted. Corrupted files cause all sorts of issues, even causing programs to crash unexpectedly. The same goes for old registry files. If they're corrupted or displaced by another program, they'll immediately begin to cause issues for your operating system.

A good uninstaller will obliterate any leftover or lingering files associated with an application. More than just getting rid of the main application, it’ll clear out preference and registry files, cookies, extensions, library files and more.

Lots of programs today come with all sorts of extra perks and processes. While they're useful when you have the program installed, they can linger and cause frustration after you uninstall the app.

If you've got a Start menu shortcut, startup process, auto-launch feature or other process affiliated with a program, it's important to remove those too. Not every native uninstaller will do this, which makes a third-party uninstaller your best option. Third-party uninstallers thoroughly sweep your operating system to pinpoint any of these extras, so they can be quickly removed.

Aside from saving you the constant frustration of trying to launch, stripping embedded processes off of your computer can help you avoid crashes and failures. Often, when executable processes try to run without the tools that support them, they crash. When they do, it might be enough to affect your core operating system or, at the very least, bring down your other open apps.

4. A third-party uninstaller is more aggressive than standard options

As mentioned above, software developers don't want you to remove their programs after they're installed. Even though they may provide you with a convenient uninstaller, it's not going to be a very aggressive one.

Native uninstallers range in their effectiveness. Some might just delete the shortcut on your launch menu, while others might actually remove the program, but leave behind the supporting files. In any case, anything short of a full uninstall isn’t acceptable. You need an uninstaller that's more aggressive

Most third-party uninstallers will leave nothing behind when stripping out a program! Because they're designed to seek and destroy, expect a good uninstaller to remove the program, aliases, preference files, supporting files, registry files and absolutely everything else associated with that program. By the time you’re done, i'll be like you never had it installed to begin with.

5. Not every program comes with its own uninstaller

Perhaps the best reason to use a third-party uninstaller is also the most common reason: Because many programs simply don't come with a native uninstaller. How are you supposed to remove a file if the developer hasn't created an uninstaller? You can't just drag it into the trash — you need something that can wipe it from your computer.

Don't get stuck with programs you don't want

If you've got old applications that need to go, the quickest, most effective way to clear them off your hard drive is with a third-party uninstaller. Using an uninstaller like MyCleanPC is quicker and easier than manually removing programs — plus, you'll get rid of leftovers, shortcuts, registry files and other unwanted remnants. If you want a program gone for good, a third-party uninstaller is the way to go!